By Chris Wood, president and CEO of Trout Unlimited. Taken from denverpost.com Photo by Scott Willoughby. Conservation in the West — particularly efforts to protect key parcels of public lands — is trapped in the partisan gridlock that grips Washington. But the package of lands bills that passed Congress in mid-December may offer a new and better way forward when it comes to protecting America's birthright.

A number of important land protection measures in Washington, Oregon, New Mexico, Montana, Nevada, and Colorado are on the president's desk today, thanks to the hard work of many people who understand that progress can't be obtained without compromise. These bills share four common elements. First, they all took a long time to pass — in some cases, a decade or longer. Two, they enjoyed broad support among the most affected communities of place and interest. Three, hunters and anglers played important roles in their passage. And fourth, they were remarkably bipartisan.

The lessons are obvious. Everything takes longer in Congress. Also, that conservation which is most local is most durable. And that a focus on meeting the needs of stakeholders instead of fighting ideological battles, as is happening in state legislatures around the West where some state lawmakers are attempting a costly, misguided and quixotic campaign to seize control of American public lands, leads to real results.

Witness Nevada and the soon-to-be Pine Forest Wilderness. Stakeholders in rural Humboldt County worked out their differences and created a consensus approach to protecting more than 26,000 acres of outstanding fishing and hunting habitats as wilderness. The Nevada Assembly thought so highly of the measure that it held it up as an example of how all future wilderness bills should proceed.

The re-emergence of sportsmen and women in land protection is noteworthy. A century ago, under the leadership of Teddy Roosevelt, anglers and hunters made clear that they understood the connection between quality habitat and quality hunting and fishing. And they took action to create the Wildlife Refuge System, the National Forest system and the National Park system that all Americans enjoy, as a birthright.

Campaigns such as the Hermosa Creek Watershed Protection Act in Colorado or the Pine Forest Range Recreation Enhancement Act in Nevada — efforts that started on the ground with local input from anglers and hunters — serve to keep quality fish and game habitat functional and healthy. The same is true for efforts to protect the Valles Caldera and the Columbine-Hondo regions of New Mexico, as well as the North Fork of the Flathead River in northwest Montana. All of these efforts found their origins in the realization of sportsmen and women that to not get involved meant to risk the degradation to places we love to hunt and fish.

All of these campaigns have at their foundation a spirit of compromise and collaboration. Hunters and anglers are optimists by nature — there is not one among us who on the last cast of the day or the last light of the afternoon isn't supremely confident we will catch the largest fish or see the biggest buck of our lives. We bring that same sense of optimism and confidence to the table when it comes to conservation. After all, conservation is the single most optimistic, affirmative and forward looking idea that America ever gave the rest of the world.

In order to protect the best fishing and hunting in the Pine Forest Range, a remote corner of northwest Nevada, anglers and hunters traded motorized access in other places to secure protection for the best of the best, including the renowned Blue Lakes fishery, a hike-in destination that's home to massive wild trout. Meanwhile, we can now use motorized access to do basic reclamation work on lands negatively affected by weeds, the effects of wildfire or infestations of noxious cheat grass.

In southwest Colorado, the prized Hermosa Creek drainage, including the state's largest unroaded — yet unprotected — landscape now boasts a new 37,000-acre wilderness and a 70,000-acre special management area that maintains access for ATV riders, mountain bikers and dirt bikers while protecting a vital native Colorado River cutthroat trout fishery and some of the best elk hunting in the country.

Collaborative stewardship recognizes that the most durable conservation is the most local and diverse. It pulls apart political divides because only political short-termers ignore the will of local voters. Compromise need not mean capitulation. Sportsmen and women may not be the most politically voluble constituency, but last week they demonstrated that they may be among the most effective. 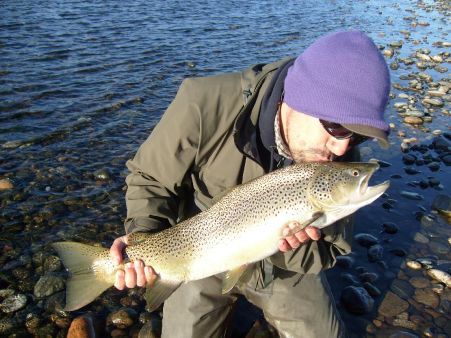