An Adventure in the Route of the Spring Creeks At the beginning of December of 2013, Benjamín Marolda and I travelled to Río Gallegos. Juan Manuel Biott was waiting for us there. Him, along with his parents, Pedro and Fernanda, had opened for us the doors of their home: Estancia Río Pelke.

Hidden behind lines of poplars which protect it from the Patagonic winds belies the main house, built with an English style in the year 1942. It is very interesting to listen the recent history of the estancia based on the sheep production: trappings of five thousand sheep that lasted for a month, the shearing time with its own costumes, hard winters with 30 degrees below zero, radio systems that communicated estancias and food supplies sheltered on a basement located inside a hill. These are some of the anecdotes that Pedro told with a lot of enthusiasm, revealing the love that attaches him to this place.

Pelke means “small”, in aborigine language. The Pelke River runs softly and tortuously through the steppe, revealing the slow slope that has the terrain. It’s a clear water river that has eroded the ground generating walls up to 2 meters high where black faced ibis nest. By climbing a low ridge one can see how many miles of river run through the immensity of the steppe. Many years ago it was exclusively inhabited by brook trout; but slowly, the browns are taking over.

Downstream from the estancia the Pelke river meets the Coyle river (spring fed waters), a spectacular spring creek with a good amount of aquatic vegetation, full of perfect buckets for trout. Its tea colored waters run through lagoons and rain pools in which the flamingos, grieves and ducks live. 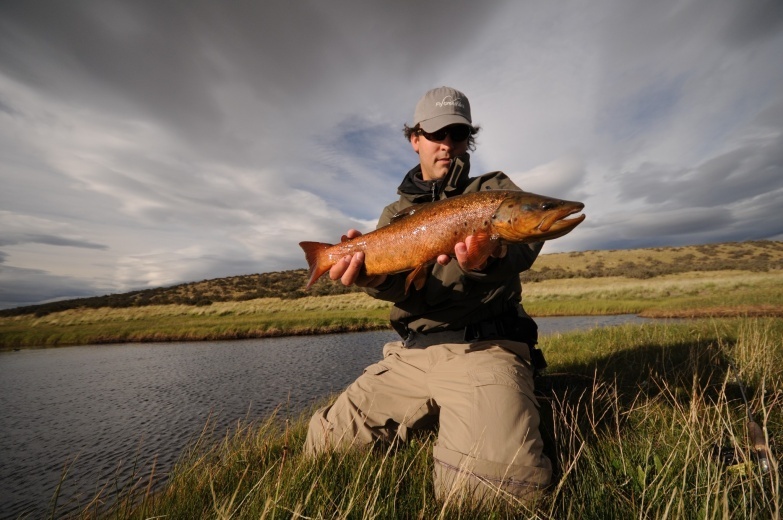 It’s a dry weather region with 150ml of rain annually. Far away, the Andes mountains show as well as the famous Torres del Paine. Guanacos, hares, foxes, upland goose and rheas are some of the wildlife species that you see very often every day. The steppe has a very a special charm, you can instantly feel the solitude and immensity.

Before the trip I spoke to angler Mario Capovía del Cet, who told me that he had had great fishing with Chernobyl ants years before. Those few words fed my enthusiasm.

As soon as we arrived an unusual 20mm rain surprised us, it was enough rain to color the Pelke River. It was going to take a couple of days to recover its clarity. But using small streamers and nymphs we caught a few trout.

The next morning, on the way to the Coyle River for a fishing session, we found ourselves captured in the purest state of a wildlife scene. Far from us, a grey fox stalking a group of baby rheas (charitos). On the opposite side, another fox was crouching and waiting to get one of the babies.

Meanwhile, two crested cara caras were flying over the nervous rhea which was already alert. One of the birds landed some meters away to distract while the other flew over the baby that was left behind. Once the rhea realized what was going on, it attempted to scare the intruder opening and moving its wings. It was too late, one of the babies was trapped in the claws of the cara cara, which rapidly started to fly. Astonished by this scene and invaded by a sense of shame, we understood that those are the rules of nature.

Following the route, a horned plover run in front of the vehicle without trying to fly. Some meters ahead we stumble with a baby fox, which curiously observed us whilst he waited for its mother’s hunting results.

From a calafate (berberis microphylla), a typical bush from this zone which grows about a meter and a half, there was a great horned owl looking firmly at us. Nature is an essential complement of fishing and all these kind of demonstrations are particular of a place with very little presence of men. 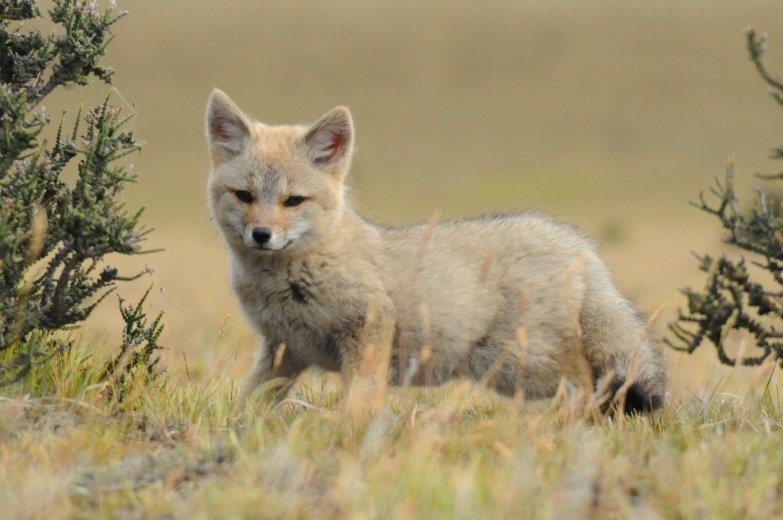 The Coyle River splits many times into smaller arms along its way. At the end of the afternoon we found ourselves fishing one of them, when I saw that Benjamín had hooked a big fish in one the channels. We ran to where he was. It was a brown trout male full of dots and iridescent spots close to the operculum. It was an impressive place where this brown was hiding, and Benja hardly left a spot without throwing a fly. Very happy for this last catch, it was time for a good Mate flavored with Té Pampa (Satureja Darwinii) a small aromatic flower that grows on the steppe, accompanied with some delicious cookies made by Fernanda.

The next day, rain and wind had given up. We slowly walked far from the main channel. The water surface was like a mirror that left uncovered every movement. As trout were more alert, any strange sound was followed by a desperate run. They weren’t even on the cast range, and with the smallest sign of danger they escaped as fast as they could, leaving a track on the surface.

We arrived to a piece of water where the river got wider, we decided to sit down and watch trout movements for some minutes. Right away we could see how they were patrolling the zone. Several times we could see that they came to the fly, looked and turned around. I put a thinner tippet (3x) and try some different flies but we couldn´t make them take. Finally I tented a brook with a small ant, a small fish that thrilled me…

Fishing days ended late; during summertime it normally gets dark around 11 pm. Some sips of whiskey were nice to recover the temperature. On the way back Pedro was waiting for us with a spectacular lamb cooked on the cross (al asador), together with some guitar playing by Juan Manuel who surprised us with his talent. 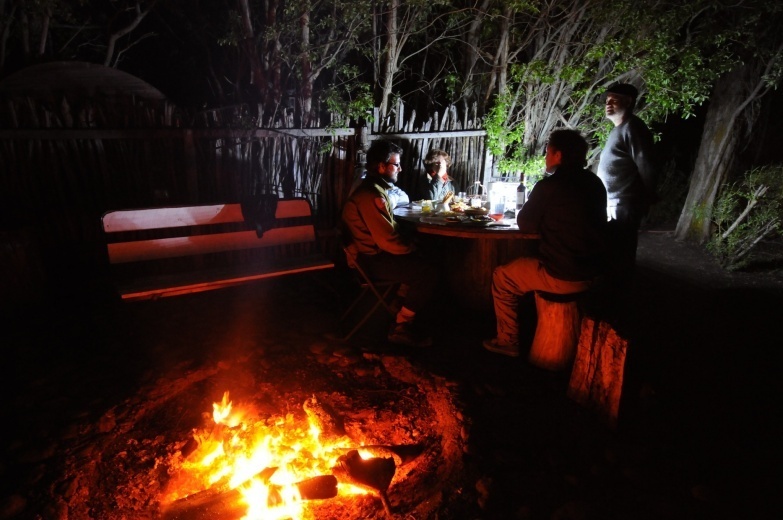 On our last day we decided to visit a different stretch of the Coyle. Juan remembered going there for the last time when he was young. Looking back on the chat I had with Mario, I tied a Chernobyl to my tippet. We walked to a point where the river had two “S” shaped curves. It should be a good trout waiting for his food in there. Where the water turned over, we saw a very good brown trout showing its back while feeding just below the surface. I looked to Juan to confirm if he had seen that roll and he told me “It’s a good one!”.

Because of the quietness of the environment I knew I only had one chance. I tried my best cast; my Chernobyl fell softly two meters upstream from the trout we saw, in order to use the drift and have it right in front of her. In that moment all the quietness was interrupted by a subtle rise and my fly disappeared. I hooked it and it jumped immediately. This brown looked rapidly for some algae to get free. I tried my best to stop it but all the tension was gone in an instant. The hook was broken! Juan looked at me in disbelief, regretted and said: “I believe that was the biggest fish I've seen in this zone”.

Still with some adrenaline, I regretted the loss but at the same time felt happy to have lived that moment. I closed my eyes and reproduced the moment of that unfortunate strike again and again. I will look for her next year…