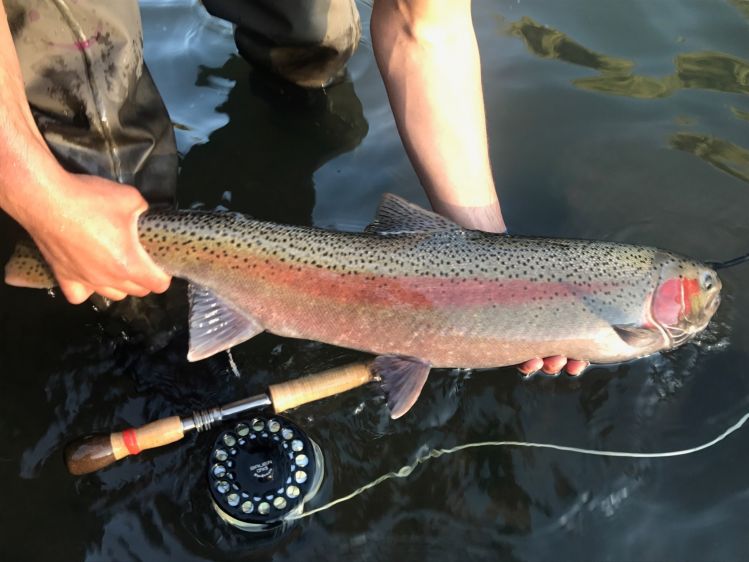 This past weekend my girlfriend Lacey and I had to travel from Boise to her parents place in northern Idaho to grab some of her things as we are moving to Colorado at the end of the week. I wasn’t going to go but I figured if I can throw my waders and fly rods in maybe I can stop for just a few minutes to fish for steelhead on the way. I didn’t get anything despite my efforts on the way there.

On the way back Lacey was driving while I did some work on my laptop. Eventually I drifted off to sleep as we wound through the mountains. I woke up and she informed me she took a big detour by accident. Oh well, I started punching away on my computer and then thought we might as well take the scenic route home and opt for a detour along the river. She was all in even though our 8 hour drive would turn into 12 hours. We pulled over at a promising spot and I hurriedly jumped into my waders and rigged my rod. After making a mess of my gear, I decided to look for another spot. We drove on looking for one more spot to try, it had to be the right spot in my mind as it would be the last chance for me to fish for Idaho steelhead for quite a while. I quickly pulled the car over when we both saw a fish roll mid river, the shoulder was rough and I bottomed out Oliver – Lacey’s VW Bug pretty hard, Oh! I checked underneath and my mechanical skills determined that I only ripped off the plastic skid plate. “We’re good”.

I fished for 15 minutes with nothing before Lacey started heckling me from the rock she was sitting on, “Remember when we were swinging for kings last year in Alaska and you kept catching spawned out steelhead on accident and you were mad about it?” I chuckled and yelled back to her “yeah but I would love a freakin steelhead right now!” A second later I had my chance I set the hook and felt the unmistaken head shakes of a big steelhead! I could hear her excited giggling from the rock above as he thrashed and rolled on the surface. It was a tense fight and after a few drag screaming runs I was able to tail him. He was a beautiful fish and I admired him for his dark red colors. I said to Lacey smiling well I guess its time to go its not going to get any better than that! Sadly she didn’t bring her waders or we may have fished until dark.

I swear seeing this fish roll while driving down the road was a sign from the fish gods and landing it was a parting gift from Idaho. I’ll remember this one for a while and can’t wait to fish Idaho Steelhead again. Next time we will pack both pairs of waders! 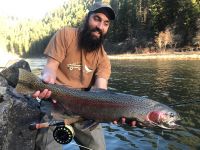 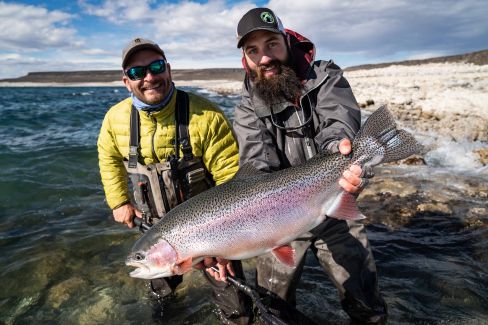