Don't Be So Negative

This is an excerpt from my newly released book Fly Fishing the Troutless River. This story was first publishe

Very few things will teach you to anticipate problems like a series of ill-fated fishing trips. Maybe that explains why those of us who learned to fly fish through trial and error seem to develop quasi-psychic powers over time. No, I can’t predict the future per se, so don’t ask me for sports picks. I can only see impending mishaps, from the minor to the disastrous, coming when no one else can.

This might sound pretty cool, but let me assure you, it’s tough being “that guy”. You know, the guy who says: “Hang on a second” when everyone else is ready to charge the hill. It doesn’t really matter if you’re just warning your friends about the tribulations of wilderness fishing trips, or if you’re saying that writing billions of dollars’ worth of sub-prime loans to people who can’t really afford to pay them back might not be such a good idea. You end up hearing: “Oh, don’t be so negative” either way. Eventually you learn to keep quiet most of the time, and find a secluded corner to bang your head against a wall when the entire economy collapses and government experts claim that no one could have predicted it.

Of course, even the most disastrous fishing trip is unlikely to tank the nation’s economy; so, if your friends insist on embarking on one that’s sure to include learning some lessons the hard way, you can still go along and rest (reasonably) assured that you’ll probably come away with nothing more serious than a story to tell…

In the summer of 1999, my (now ex) wife and I started spending time with another couple I knew from work, who happened to be outdoorsy in a generic, somewhat unfocused way. They particularly loved high mountain lakes. One of their favorite things was to spend the evening playing with their dogs around one of the many lakes in the mountains near Denver. As the sun sank, the water would come alive with rising trout, but they had never tried to catch one. I had a young black Labrador who liked to play in the water as well, but when we came along I also brought a fly rod. Just one bejeweled little brookie was all it took. The epiphany was virtually instantaneous.

Soon my new protégés wanted to fish constantly. My own plans to explore Colorado’s alpine lakes had been on the back burner for years, and now I had the perfect excuse. On weekday evenings we fished dry flies for brookies and rainbows in Brainard or Red Rock Lake in the mountains above Boulder. On our days off, we searched the beaver ponds of Rocky Mountain National Park for the elusive greenback cutthroat.

As the summer went on, our desire for seclusion and remoteness drove us farther into the wilderness, where only those willing to leave the beaten path will ever cast a line, and those with an appetite for solitude and spectacular scenery can find fulfillment. Each trip had to one-up the last. To cap off the summer, we would need a place so remote that it bordered on the absurd. That was when we heard about Little Echo Lake.

According to the guy at the Bucking Brown Trout Fly Shop in Nederland, it was a small alpine lake near James Peak. To find it we would need a GPS, and to even get close, a four wheel drive vehicle. A hike in was required. What he told us about the fly fishing sounded a little hard to believe, but he was clear about bringing some black ant patterns if we were going to fish it in August.

It was too intriguing. We had to plan an outing as soon as possible to fish the place. We were able to find it without too much trouble, and the hike wasn’t too bad either (at least with only fly rods and float tubes to carry), though it did include an extended uphill climb to get back to the truck.

A glacial aquamarine-colored pothole carved out of bare rock, Little Echo Lake butts up against the sheer side of the mountain right around timberline, where patches of snow persist even in August. It’s no more than fifteen acres, but our informant claimed it was more than one hundred feet deep. It wasn’t too hard to believe. You got the sense looking down from a float tube into it’s semi-turbid depths that it was bottomless. I suppose that could be a bit disconcerting if you were to dwell on it; the notion that there might actually be room to hide Cthulhu down there.

We had our flying black ant patterns ready, and to our delight, the fly shop guy had been telling the truth. The moderately sized (mostly twelve to fourteen inch) fish that were happily feeding on the surface were lake trout. Yes, I mean mackinaw, Salvelinus namaycush, taking dry flies. Cool.

We spent the afternoon blissfully catching the peculiar little lakers. It was the pinnacle of a summer of alpine adventure that, at least for me, a moving water guy at heart, would never be replicated. But it wasn’t enough. We had to go back, only this time everybody wanted to camp. I couldn’t help myself…

“Hey guys,” I offered as gently as I could, “This sounds great and all, but I don’t have mountaineering gear. All of my camping gear is bulky. That hike is gonna be a lot harder. Not to mention the altitude. It could get dicey up there.”

“Oh, don’t be so negative!” was the (completely predictable) reply.

I was only trying to protect them. It wasn’t so much that anyone was really out of shape, but perhaps not quite in prime physical condition either. With all the gear we would need to carry, one (or more) of them might collapse from a walk around the block, much less an uphill hike. They also seemed to be expecting idyllic camping conditions, complete with roasting marshmallows over a fire under starry skies. I was picturing how much wind it would take to make trees grow horizontally.

Then again, whether you’re steelheading in sub-zero temperatures in eastern Washington, or hiking around an Arizona bass lake all day in 115 degree heat with a two-inch Saguaro spine lodged in your calf, suffering for fish is just part of the game. They had to learn it sometime. As for me, I had a Ph.D. in Suffering for Fish, acquired through many years of doing stupid things in order to catch fish. One more time wouldn’t kill me.

Maybe they started to understand what I had been trying to say when they saw how much crap we would have to carry, but by then we were committed. I had a change of clothes and some food and water in my backpack, to which was lashed a fully inflated float tube, a (large) sleeping bag, waders, wading boots, a fly vest, a rod and reel, float tube flippers, and my old Coleman 10’ x 10’ dome tent (which weighed twenty pounds on its own).

I didn’t press the point about what we were getting into, as it was certain to be met with another remark about having a bad attitude…

We couldn’t keep the fire going. The wind was ripping through our campsite, causing all manner of mayhem. My old camp stove might have gotten the job done, but it was ten pounds of metal, and burgers can be cooked right over a fire... if you have a fire. Now we couldn’t eat.

All there was to do was to hide in the tent; which, as we quickly discovered, would have worked as a headsail on a fifty-foot sloop. Most of the night was spent holding it off from smothering us, but every so often the wind would catch it just right, and it seemed very much like we might actually blow away, even with four adults, three large dogs, and all of our gear in there with us.

The next morning we dragged ourselves to the lake and spent the day tooling around in our float tubes until it was painfully obvious that the flying black ants were gone. That left the hike back up the mountain. Rest stops were every thirty seconds or so, and the gear load was redistributed so that I ended up dragging an extra float tube behind me. That ruined it, of course, but it was still better than having to drag out a body had anyone actually dropped dead.

I’ve never experienced the sensation that I could take off and fly as strongly as I did the moment I stripped all that crap off of my back.

Can’t say I didn’t warn them, but when you’re “that guy”, it sometimes feels like you could warn someone not to pick up a live cobra and still hear about how you have a bad attitude. It’s my own fault. Try as I might, I just can’t seem to grasp the notion that vetting ideas is really just negative thinking. Thank goodness for the outdoors, the tried-and-true proving ground for Murphy’s Law, where folks who think that all they need is a positive attitude are often the first ones to be eaten by wolves.

Anyway, no one died, and the economy didn’t collapse, so it’s all good. Then again, now that I think about it, the economy did collapse starting early the next year. The so-called “Dot-com Bubble”. No one could have predicted that one either. Right. We need more fly fishermen running this country. 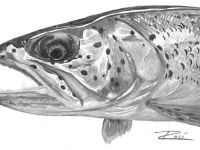 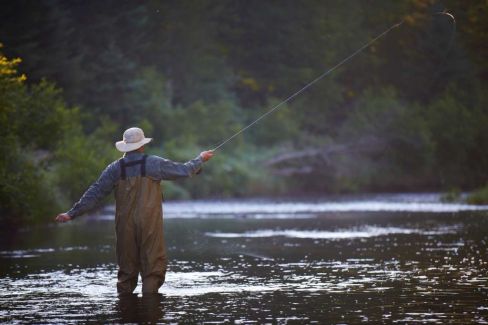