Fly Fishing for Tigers on the Okavango

Tiger on Fly in Botswana, a Guides View. In the distance I see a flock of birds flying in one direction- a good sign. We have to follow the birds, which is difficult because, unlike them, we have to follow the ancient river bends of the Okavango. The canals are our highway through the 8ft walls of papyrus on both sides of the canal. After a few kilometres the water changes colour, although only slightly. The colour of Coca-Cola gradually changes to that of coffee. The Barbel run is close!

Around the next bend we see thousands of birds. The run is large, 250 metres at least. Hundreds, thousands of barbels are moving upstream, devouring anything that fits into their large mouths. The sound of their jaws snapping is amazing. The best comparison would be to a crowd clapping hands at a forest fire. After eight years of guiding on the Okavango, this remains one of the most interesting and beautiful experiences nature has to offer.

We drive slowly towards the head of the run. This is where one usually sees most of the action. Then I recognise the orange flashes characteristic of Tigers hunting on the surface of the water. A glimpse of a 30cm pike disappearing in seconds into a confusion of orange fins, black and white stripes and teeth makes one doubt if the popper is big enough. Two false casts before the popper lands perfectly in a shady spot against the papyrus. The first strip causes the popper to push the water with expected precision. Halfway through the second strip something explodes behind the fly causing it to disappear into a full set of terrifying teeth.One, two steady line strikes later and the fish is on. Only a second later the most aggressive fresh water fish in Africa realises this too. This is how one of the most exciting adrenaline filled fights with a Fly rod begins.

It is under the boat, behind the boat, 2 metres above the surface, next to the boat and 20 metres behind. She plunges into the depth of the river and seconds later she resurfaces with a vicious shake of her head. The popper seems small between her large white teeth. She’s a female; the male rarely exceeds 4lb in weight. The powerful runs shorten as the fish tires. The fish stays next to the boat. With a few controlled tugs she reappears from the depths while everyone looks on, amazed by her size. (Any fish above 10lb is worth a trophy.) I take the leader, pull the fish slowly towards me and carefully I slide the Bogagrip between her teeth. She is heavy...12lb and definitely a trophy.

After a few photos and congratulations she is returned into the river. With the Bogagrip I hold her in the stream and ten minutes later she is ready. As I open the Bogagrip I watch her slowly disappears into the deep and I realise once again, I have the best job in the world! 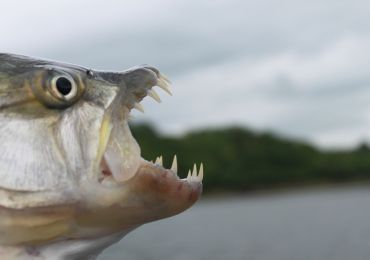