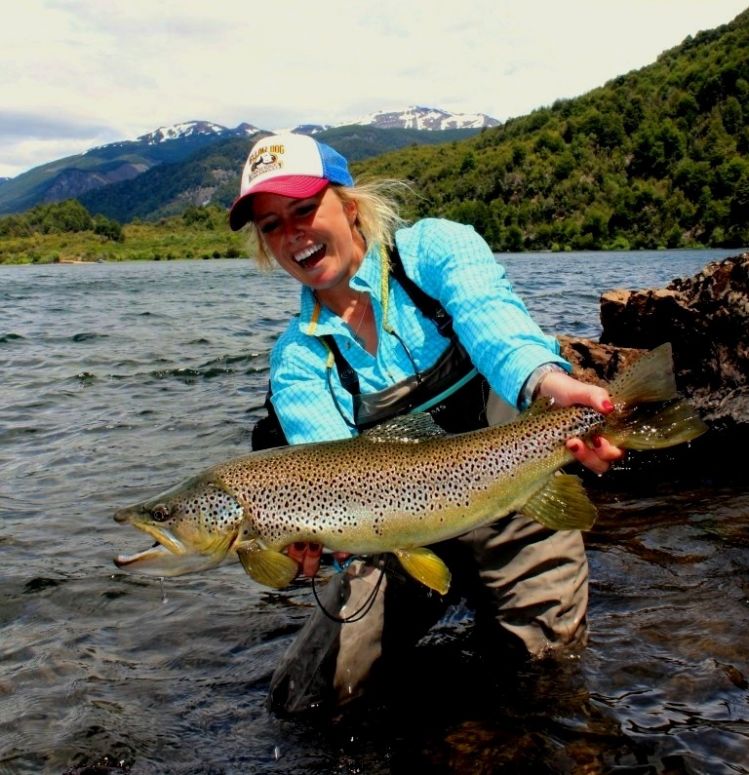 Bessie Bucholz is Yellow Dog's program director for New Zealand and assistant director for South America. Bessie grew up fishing and rowing down the upper North Platte River in southern Wyoming. After studying at the University of Virginia, Bessie returned to Wyoming to guide in the Saratoga area. Later on, she lived, worked—and fished—in New Zealand. She has traveled and fished extensively throughout the U.S., Canada, Chile, Argentina, Bolivia, New Zealand, and the Cook Islands.

Fd: How did you get started in fly-fishing?
Bessie: I must confess: I was raised by a family that put hunting before fishing. Fortunately, my best friend from childhood and her family stepped in to change that and they deserve full credit for helping me discover the world of fly fishing. We would always float the North Platte River as kids and go on fishing trips here and there, and I eventually turned this passion into something more by taking a job as a fishing guide on the North Platte River right after college. I never dreamed that fly fishing would eventually become the backbone of my career, but after working jobs in New York, Washington DC and New Zealand, I can tell you that there is no place I’d rather be than here in beautiful Bozeman, Montana working for Yellow Dog (and fishing lots)!

Fd: What triggered you into moving to New Zealand?
Bessie: Back in 2012, I took a backpacking trip to Australia and New Zealand and after about 6 weeks down there, it occurred to me that I was probably going to have to return to the type of office job where vacations would be few and far between and the thought was positively terrifying. So terrifying that I just decided to move to New Zealand just months later. I never dreamed that this spontaneous act would translate into nearly three years of adventure, friendships, breathtaking scenery at every turn, and fishing (of course). New Zealand’s wilderness is truly indescribable, but its immigration policies are quite formidable, which is what got me thinking that there must be a way to do what I love whilst maintaining a (legal) connection to a country that has given so much to me. When the thought occurred to me that Yellow Dog really should have a New Zealand program, I quit my job, traveled a bit more (exploring the lodges that would later be part of the NZ lineup), packed my bags, moved back home and interviewed in Bozeman two days later. Now, I’ve got the job of my dreams. Someone please pinch me!

Fd: Any advice for those visiting NZ on a fly-fishing trip?
Bessie: New Zealand fishing is really more akin to hunting, except for you get to release your quarry back in to the cool, clear waters from which they came. However, this fishery has humbled me time and time again. The appeal of New Zealand trout fishing will forever be the scenario we all fantasize about: catching a 10+ pound brown trout on a size 18 Parachute Adams in one of the most stunning settings on the planet. But the reality of New Zealand trout fishing is that quality will always prevail over quantity, and consequently, there is little room for error. These trout have only humans to worry about and they have a relatively long life-span, so while they have time to grow big, they also have time to grow wise and wary of the many anglers who travel from far and wide to chase them. To be honest, the odds are not great for the average angler… and it’s uncanny how quickly these fish can make experts feel average. You have to be prepared to take the highs with the lows: there will certainly be a day where you don’t sting a single fish. Then, on another day, you will bring that shovel-headed brownie to hand and your face will be sore from smiling so much. Regardless of what ends up in the net, the opportunity to pursue this beguiling species in such a pristine location should always put any of your frustrations into perspective. I guarantee that your fly-fishing ability will improve more after two weeks in New Zealand than after an entire summer in Montana.

In order to optimize your chances of landing that fish of a lifetime, consider doing the following:

-Practice for accuracy and delicacy. Hero casts do not translate into fish in New Zealand. It’s far more important to make a few false casts and carefully place the flies in the feeding line of a fish you have spotted than to be able to throw them a country mile at a fish you cannot even see.

-Splurge on the polarized glasses. That extra zero on the price tag will make a world of difference for you (and your guide).

-Get into shape! Finding these big fish can be physically demanding and you don’t want to miss out because you put fitness on the back burner before your trip.

-Listen to your guide—they know the fish and they know how to fool them.

-BOOK YOUR TRIP WITH YELLOW DOG!

Fd: You’ve been around the world because of fly fishing. Which places have impressed you the most?
Bessie: I’d have to say that the wild and wonderful jungles of Bolivia with those magnificent golden dorado and their almost mythical predatory prowess tops my list. This species is so unbelievably fierce, you sometimes have to wonder if it really is safe for you to be wading in the same waters where they hunt and feed. Hooking up with one of these bad boys is one of the most thrilling sensations I’ve ever experienced… but to be able to hold one by the tail and admire its gilded scales, muscular body, enormous gill plate, and mouth festooned with sharp teeth is truly a special experience. This fish is an integral part of the Bolivian jungle ecosystem and a consecrated piece of the culture of the indigenous Indians who reside in this jungle. The opportunity to fish for golden dorado is a fun and unique one in and of itself, but the opportunity to encounter the jungle on such an intimate level is one unto itself. You will be wading through gin-clear freestone rivers, you will be blazing trails through dense vegetation with a machete, you will be batting thousands of brilliantly colored butterflies away from your face as you hike up the river, and if you so desire, you will be camping out and listening to the jungle’s residents come alive as dusk gives way to a star splattered night sky overhead. The jungle of Bolivia is unparalleled for its primeval beauty and the fishing is outrageously fun, which makes it a must-do for any serious angler who is willing to take a walk on the wild side.

Fd: How do you see the fly-fishing industry today and where do you think it’s heading to?
Bessie: Fly-fishing has never been more popular… especially among the ladies! There are several trailblazing women in the industry these days and this, combined with a burgeoning female presence in social media (related to fishing), is something that I think is lowering the barrier of entry and really empowering other women to get their feet wet and give fly fishing a try. With the proliferation of images featuring women with fish and or rods in their hands, the sport itself has become much less intimidating and more approachable to women who want to enter a conventionally male-dominated sport but don’t know where to begin or how. Additionally, many different retailers are making a more concerted effort to cater to the female angler with more flattering fits and a wider selection of merchandise (finally!), which will certainly enable women to become better consumers. As a former fishing guide, it was always so neat to see so many wives out with their husbands on the water, often times out-fishing them! I’m blown away by how badass women actually are at fly fishing, and I think a lot of it has to do with the fact that they are great listeners and eager learners, driven to become better simply because it isn’t a sport that large numbers of females have traditionally excelled in.

Fd: What advice would you give for those willing to be a part of it?
Bessie: Sign up for casting lessons and spend time practicing! Mastering the fundamental techniques of fly-casting is half the battle. Then, book a guided trip on your local waters. Listen to your guide and ask lots of questions—he or she will offer you invaluable information that will enable you to become a more autonomous angler. And don’t forget: there are no stupid questions!


Fd: Regarding fishing, what’s next for you? Something new in your bucket list?
Bessie: I’m heading to New Zealand again in March with Jim Klug, the co-owner and founder of Yellow Dog Fishing Adventures, so that we can spend some good time with our outstanding lodges down there. I’ve got a Cuba trip on the books for May with Yellow Dog and then I’ll be looking to host a trip sometime in the late summer or early fall. Kamchatka is currently occupying the number one spot on my bucket list, as trout will always be my first love. I constantly daydream about skating mouse patterns in front of those voracious (and genetically flawless) rainbow trout. Those MI-8 helicopters are also so badass and they take you to some of the most untouched and dramatic landscapes you can find anywhere on earth. Need I say more? Now, although I’m partial to freshwater, I’m thirsting for a trip to the Seychelles. The plethora of exotic species that one can catch in the span of one day is staggering and it is a destination that not a single one of us at Yellow Dog would deny wanting to visit (or return to). It is true that the fishing destinations that require the most travel time and logistical coordination are the ones that hold the most mystique for me… and often times, they hold the most fish as well! 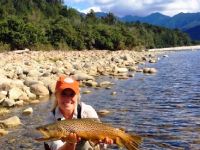 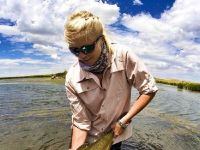 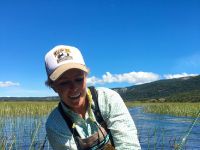 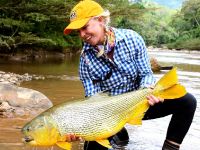 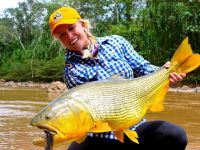 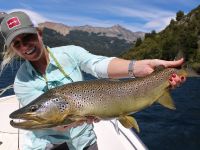 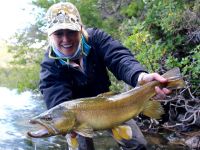 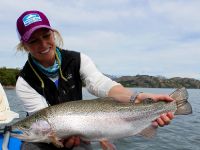 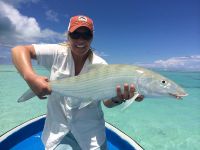 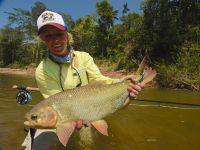 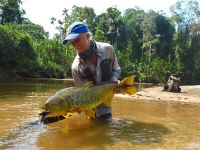 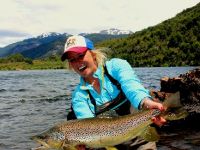 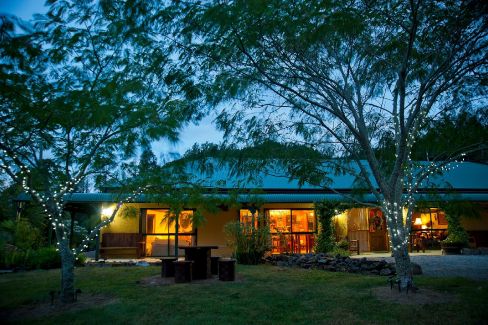