You probably recognize Jasper Pääkkönen from his role as Halfdan the Black on the hit series Vikings, he is one of Finland’s most renowned actors, but he is also a committed fisheries activist who has been awarded for his achievements in conservation issues. He is one of Patagonia’s ambassadors and a true fly-fishing fanatic since his early days. Here’s the talk we had with him. 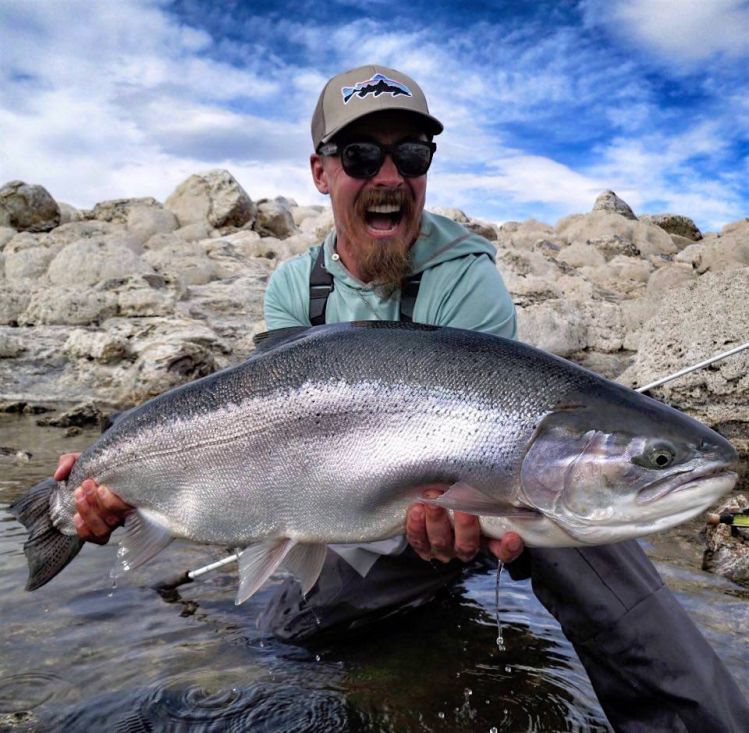 Fd: What are your first memories related to fly fishing?

Jasper: My very first fly fishing related memory is from my grandmother's summer place in southern Sweden when I was maybe 8 or 9. It was the only cabin by a little lake that was stocked with rainbows, and there were always 1 or 2 fishermen fishing the lake, mostly with conventional spin gear.

The first time I saw a fly fisherman from a distance I was mezmerized. I remember vividly how I couldn't understand what was going on: how could the whole line stay in the air like that? It appeared there was nothing in the end of the line, no large lures, no bait. How was he catching fish with nothing but his magical line?

That moment planted a seed of obsession that never went away, and when I was 11 my parents bought me a fly tying starter kit, and later that year I got my first fly rod for x-mas. Before then, I had been fishing with my dad on spin gear, and since he didn't know how to fly fish he wanted to make sure I didn't start learning fly fishing too young and getting too frustrated without having someone to teach me. But I had already started hoarding fly-fishing books from the library and during my early years I went through everything that I could find written on the topic, including Isaac Walton's The Compleat Angler and other classics. I knew fly-fishing history inside out, much more than I do nowadays... And everything I learned I had to learn from books. But that didn't bother me at all. I was on a mission to become a fly fisherman.


Fd:  What can you tell us from your days fishing in the famed Kola Peninsula?

Jasper: First time I fished Kola was with my dad on the river Varzuga back in 2001. The trip opened my eyes to what fishing can be in remote, nearly untouched locations where overfishing, hydropower and other common problems haven't affected Nature too much.

Since 2009, I've been going back every year, and my trips to Kola with some of my closest and oldest fishing buddies are the highlight of the season. There is something utterly magical with boarding the old Russian military Mi-8 chopper and knowing that in a matter of minutes you're cut out of cell-phone connections for a week, and that the closest road will be hundreds of kilometers away. We fish the rugged northern rivers such as Varzina, Drozdovka and Sidorovka and always book the whole camp to our own group of friends so that we can come and go as we wish. Also, we fish the rivers during hiking weeks instead of chopper weeks, meaning we hike to the pool and are not tied to schedules or set fishing hours. We really bum it out: the little sleep we get is during the daytime, usually after breakfast, and nights are spent on the river. Luxury is the very last thing I'm after when it comes to fishing a remote location like Kola, but I also do understand why some fishermen want to have their hot showers and five-course meals even on the tundra at one of the many luxury camps. That's just not my idea of a perfect week of Atlantic salmon fishing.

I also pick my weeks so that water temps are high enough for dries, as I think catching a 20lbs+ salmon on a dry fly is one of the coolest, most badass things one can experience. It's true rock n’ roll fly fishing.


Fd: How have you managed to balance your prolific acting career with your fly-fishing agenda?

Jasper: Balancing these two is easy. I often say I'm first and foremost a fly fisherman, and other titles such as "actor" or "entrepreneur" come far behind. If I had to choose between acting and fly fishing for the rest of my life the answer is easy: I'd quit acting without hesitation. I love my job, but fly fishing is not only a passion, but a lifestyle.

The good thing about being a film actor is that you have loads of free time waiting for the next job, so schedule wise there are no problems combining the two. Also, through my acting, especially through all the interviews the job requires me to do on a more mainstream level, I've been able to promote both fly fishing as a sport as well as bring lots of crucial problems facing our rivers and fisheries to the bigger public's attention.

Back when I was younger (I'm 36 now) and the teenage audience in Finland was more fanatical about my work, I brought up my fly-fishing hobby in every interview that was written. Later on, I was contacted by the founder of Vision Fly Fishing, Juha Koivu, who told me that as a result, the sales of Vision’s starting rod & reel combos had multiplied nationwide. I was always aiming to get a percentage of the fan base interested in the sport I love, and it was rewarding to get official confirmation from a manufacturer that my project had succeeded.


Fd: Are fly fishing and acting separated compartments in your life or is there -in your opinion- any link or correlation between them?

Jasper: They are quite separated. Sometimes acting interferes with fly fishing, and during the last years I've had to cancel a couple of epic trips due to work. But the rivers aren't going anywhere.
What I've often said, though, is that all actors need a passion outside of their acting to keep them grounded and happy. For myself, fly fishing balances the madness of this work in a perfect way.


Fd: You are one of Patagonia's fly fishing ambassadors and have continuously supported conservation actions. How do you think the fly-fishing community could get more and more anglers to participate in fish and waters conservation?

Jasper: The fishing media plays a huge role in getting the bigger crowd first informed about threats and problems facing our waters and fisheries. A great example is one of the largest fishing magazines in Sweden that really pushes and challenges their readers to understanding the problems AND to take action. It's all about making it easy, understandable and even cool for the normal fisherman to feel like he could and should do something: I've often written easy step by step instructions on social media on how to contact the MP's on a topic that needs attention, and people love to participate when it's not too complicated or time consuming.


Fd: You’ve fished for huge rainbow trout in Patagonia, salmon in Norway, tarpon in Cuba... Is there a fly-fishing trip that you are still dreaming to do?

Jasper: I have loads of places on my bucket list: jungle tarpon in Central America, the ASR three rivers program in Kola, the infamous Alta, tarpon exploration in Sierra Leone (which at the moment is not a tempting option due to the ebola outbreaks), GT's in the Indian ocean... The last one is becoming true in a few weeks when I go on a Solid Adventures exploration trip to Lakshadweep, Laccadives, India. I've been mail ordering GT fly lines and other gear during the short breaks in filming Vikings here in Dublin, and I'm starting to be all set for the trip.

Also, I've never fished the world famous trout camp at Varzina in Kola, but I've booked the best week at the camp for 2017 and I'm lucky to get to go with some of my closest friends.


Fd: Some short ones:

Best catch of your life?

It's impossible to name one, but among the most memorable ones are a 30lbs salmon on a dry fly and #6wt SH rod from Norway and a 81cm / 32,5" brown trout from northern Sweden. But now that I think of it, I guess the best catch would have been the first brown I ever caught back in 1992 in Kaarneenkoski, Kuhmo, in Finland, a beautiful 3 lb brown on a small Pheasant Tail nymph.


Fd: If you had to choose just one species to fish for, what would that be?

For the past 10 years or so I've gone back to fishing for Atlantic salmon over big browns. If I had to choose, I'd be throwing dry flies for salmon for the rest of my life.


Fd: Any special or favorite piece of gear that you always carry on your trips?

My most faithful rod is a white 9' 6wt Vision Venus. I take it pretty much everywhere. Besides that, I'm not too picky about what I fish with: I'm just as happy casting with a 200€ rod as I am with a high end 800€ one as long as they do the job. I used to be more into the equipment hoarding side of this hobby, but I guess I'm becoming more and more of a bum in that part of the sport now. I must have 20-30 rods back home, but I only use a couple of the older ones - until they break.


Fd: Finally, any words for those who are just starting to get into fly fishing?

Jasper: You've made the best choice of your life. Be patient and try to get to fish with anglers that are more experienced than you, and when you do, pay attention to what they do. Learning how to fly fish is not only about observing the surrounding nature but observing how others do it. 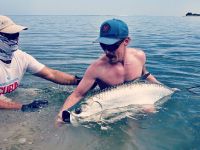 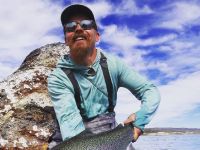 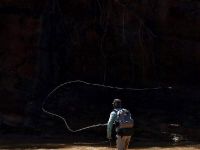 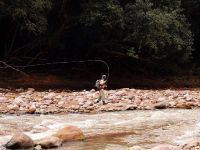 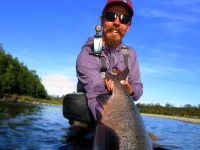 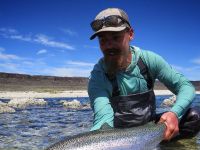 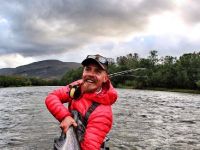 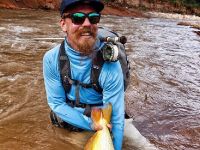 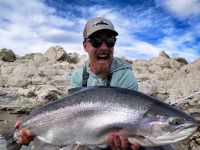 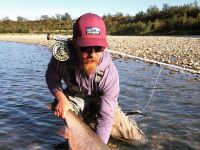 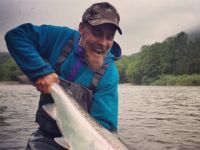 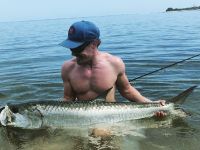 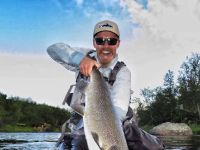 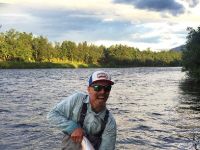 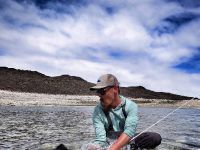 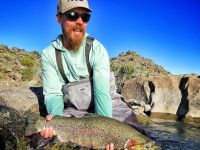 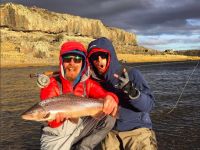 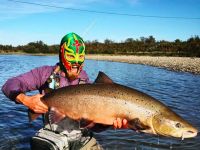 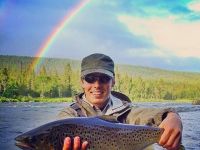 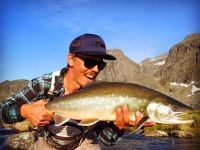 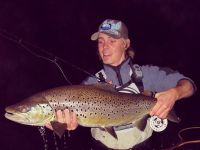 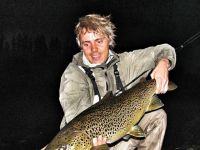 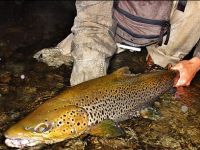 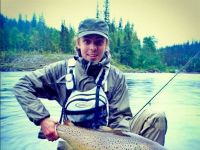 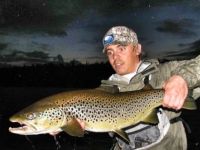 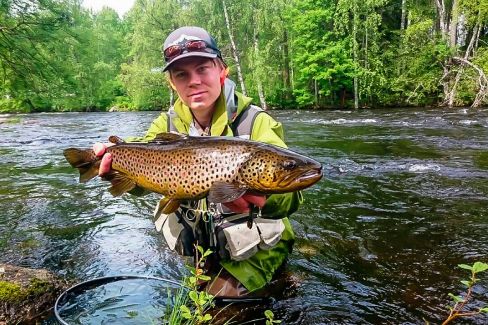