Join Simon Gawesworth and the giant trout of the Río Grande

If you want to learn to cast like a pro- from a pro, you need to sign up soon. After a week with Simon you'd Join jovial host, and champion fly caster and fly fisherman, Simon Gawesworth for a week of breath-taking Sea Trout Fishing at Kau Tapen lodge, in Tierra del Fuego, Argentina, home to 5 IGFA world records for Sea-Run Brown Trout.
Have you ever wanted to fish for the big browns in windswept Tierra del Fuego? You have seen the photos—huge trout cradled by anglers who are leaning into a steady wind. They didn't use to catch very many, but thanks to the evolution of spey fishing, the catch rates are terrific. Don't be embarrassed because you can't fish the two –handed rod—this is the perfect opportunity to learn. Let Simon be your mentor, and you'll catch double digit trout with both single handed and spey rods. This is your chance to learn from the best!
Spend the week of January 10-17, 2015 at the finest and most traditional lodge in South America, Kau Tapen Lodge, and fish the Rio Grande, known as the best river in the world for sea run trout fly fishing. While you are fishing, enjoy the impeccable accommodations and royal treatment of the Kau Tapen Lodge.
With a week's instruction and tips from Simon, you'll be able to apply many of his techniques to your own fishing scenarios. You'll catch more fish-especially hard to reach fish, and enjoy fly casting more.
The departure is limited to just 10 anglers.

Simon learnt to fish at the age of 6 and took up fly fishing when aged 8, being trained by his father - well known fly fishing instructor and author, John Gawesworth. By the time he left school at 16 to teach fly fishing Simon had become the British Junior casting champion, repeating the feat the next year. In the following years Simon broke seven British casting records and won the adult casting championships three times in succession, representing England in two European and one World Team Championships.
During his career Simon has written numerous articles for the fishing press, published two books on spey casting, presented five instructional videos and DVD's, appeared on numerous television and radio shows, demonstrated casting at fly fishing shows around the world. He is recognized as one of the leading authorities on fly casting and fly casting instruction.
He is a FFF Master and THCI (Two Handed Casting Instructor) certified instructor and also holds the APGAI and STANIC diplomas for Fly Fishing Instruction in the UK. Simon works for RIO products in Idaho where he designs and tests fly lines, as well as being the marketing manager for RIO. He conducts fly casting classes and seminars around the world. 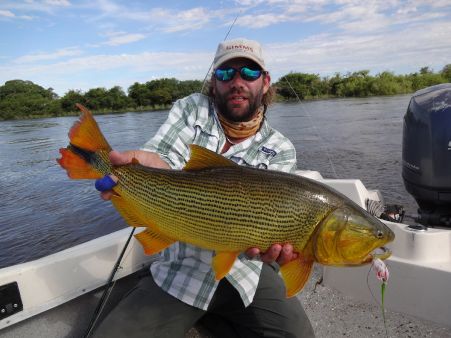