What's the Knock on Lenok? What’s the knock on lenok? That depends on who you ask. To Mongolian flyfishing guides, accustomed to their clients’ monomaniacal pursuit of giant taimen, the two species of lenok are trustworthy, loyal, helpful, and friendly—the boy scouts of the salmonids.

But according to The Great Soviet Encyclopedia, our plucky Manchurian trout prey on chum salmon eggs and fry in the lower Amur basin, inflicting “some damage” on the fishing industry. Not the rapacious sort of damage that might inspire either respect or a Twitter feed, but the hierarchy is clear: salmon are better.

Another committee of Siberian scientists—Alekseyev, Kirillov, and Samusenok—report that “Brachymystax lenok has juvenilized skull morphology in comparison with Salvelinus.”* The implications are obvious here, too. Compared with the noble char, lenok are immature, the toddlers of the family. Surely this is harsh treatment for an ancient line, survivors of the Pleistocene’s brutish cycles of glaciation.

In the farthest headwaters of the Amur, across the Mongolian border, we don’t mind if brachy means “short” and mystax refers to that weak-looking lower jaw. Looks—like hooks—can be deceiving. Yes, sharp-nosed lenok remind us of rainbows, while blunt-nosed lenok recall browns, but each retains its own personality.

For further clarification, consider that Lenok is a not uncommon Slavic name, roughly on a par with Trudi, and that it’s also a class of Russian submarine. Perhaps the scientists’ disdain has something to do with the lenok’s innocent appetite for floating mouse and grasshopper imitations, the naïve enthusiasm with which they attack the dry fly. But why apologize for your best qualities? 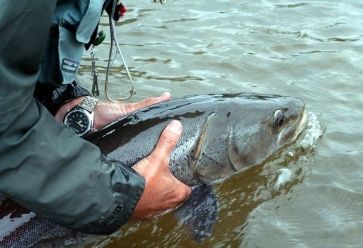