Distribution: Sockeye salmon live in the northern hemisphere, but is meanly located in Bristol Bay, Alaska; in Frasers River system, British Columbia, and Kamchatka´s peninsula in Russia. They are also found in the west Pacific Ocean coast from Hokkaido, Japan, to Anadyr´s River in Russia.

The name given to this fish is not related to its eyes color; its origin is associated to some native words (Sukkai). Its classification as nerka derives from Korykak, the mother tongue spoken by the inhabitants of the Kamchatka´s Peninsula.

Weight and measures: Sockeye are medium sized if compared to the other Pacific salmons. They can weigh between 1.8 kg to 3.2 kg (53 to 66 cm) after spending three years feeding in the sea. The worlds fly fishing record was 7 kg (85 cm).

Habitat and life cycle:  It is an anadromous and semelparous species of salmon found in the Northern Pacific Ocean and rivers discharging into it. They are born in freshwater, migrate to the ocean and return to their natal river to reproduce and die. They can live a maximum of 7 years, but the average age is between 4 to 6 years.

Sockeye navigate to home rivers in order to spawn between July and October. The longest migration ever recorded was 1900 km.

As many other Pacific salmon species, there are some Sockeye specimens that spawn after 2 to 3 weeks of being in freshwater, and some others that take 2 to 3 months. Typical places to procreate are streams and in lakes near shore. The eggs fertilized in the fall hatch between late winter and early spring days, depending on water temperature. Like all Pacific salmon species, when they die, they become an important food source for mammals and birds, increasing the nitrogen level as well. This increases the algae population and consequently zooplankton.

Appearance: Sea-going sockeyes have silver flanks with black speckles and a bluish top, giving them their "Blueback" name. However, as they return upriver to their spawning grounds, their bodies turn bright red and their heads take on a greenish color. Breeding-age males have a distinctive look, developing a humped back and hooked jaws filled with easily visible teeth.

Diet: Sockeye salmon, unlike other species of Pacific Salmon, feed on invertebrates, amphipods and small fish during saltwater life stages, and once they reach freshwater they stop eating.

Sports: By the time Sockeye start its run to spawn, no fly could put on its way; but once they get to their spawning grounds they could attack a fly if irritated. 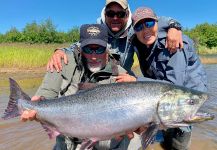 by Vincent Delisle
2090
View All 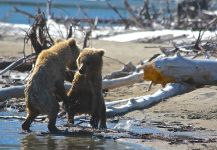 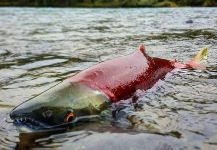 by Mikey Wright
774
View All