This fish belongs to myleine sub-family, which includes small specimens commonly found in streams and aquariums around the world. There are very similar minor species such as: pacu chico, pací mirín, medallion, pacucito or brillantina.

Weight and measures: The average size varies from 3 to 8 kg depending on the environment, with the rare exception of 14 kg fish.

Distribution: It is a South American native fish found in Argentina, Brazil, Venezuela, Peru, Bolivia and Paraguay. It lives in different basins, where the main ones are: Parana´s River, Paraguay´s River, Uruguay´s River and the Amazon River.

Habitat and life cycle: Pacu is one of many migratory fish that can be found in the basins aforementioned. This species usually prefer subtropical environments, reason why it appears in the middle Parana River between November and March (practically all summer).

During late March, when it starts to get colder, they group in large shoals of fish in the deeper streams and head upstream looking for warmer waters; they can also be found in the back eddies near the banks.

Reproductive stage begins at the beginning of summer, between December and January, when temperature is high. They usually spawn in areas with abundant vegetation that aids to build the nest providing the young future shelter. By the time female specimens deposit the eggs the male fertilizes them and according to the average water temperature, they could hatch in only 48 hours.

A feature of this species is the external sex differentiation. Male has a reddish color tail fin while female is black.

Appearance: Pacu is a robust fish with an oval to elliptical body shape that is flattened laterally. Its tail, head and eyes are small compared to the body, and it has strong jaws with a double row of highly evolved molar form teeth. Its color is olive - dark on the back, bright golden on the sides fading to lighter color towards the belly, with the exception of much darker specimens in clear water.

Diet: it is an omnivorous fish that feeds on ripe fruits of some trees near the banks, as well as from aquatic plant roots, flowers of water lilies, snails, crustaceans and small fish. When overflow occurs in the marshes, the fish gets close to places where marsh plants grow and pounding the stalks with rapid movements of the caudal fin they get some fruit. 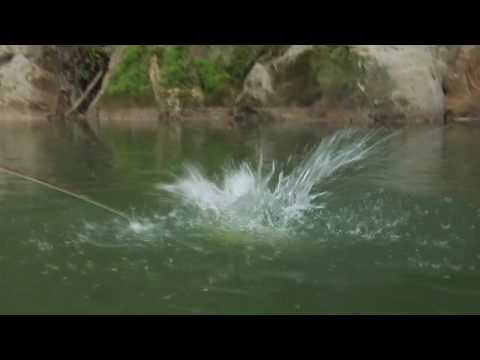 Kings of the River 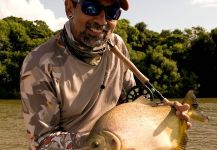 by Thiago Carrano
2141
View All